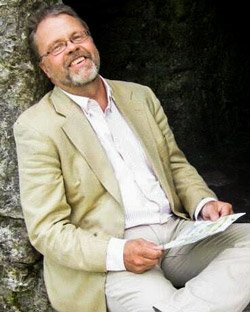 Peter was a member of the Augsburg University faculty from 1994 until his retirement in 2017, serving as the conductor of the Augsburg Choir and the Masterworks Chorale. He also served as Artistic Director of the annual Advent Vespers, a combination of music and liturgy involving over 300 singers, instrumentalists, and readers, presented by the Augsburg community each year at Central Lutheran Church. He led annual Augsburg Choir tours throughout the United States, Europe, and China during his tenure, and presented and commissioned world premieres by such noted composers as Steve Heitzeg and Kari Tikka. Peter was an inspiring and charismatic teacher who influenced and encouraged many students over the course of his career.

In addition, Peter served as artistic director of the American Choir Festival in Leipzig, Germany, music director for the Warland Symphonic Chorus, assistant conductor of the Dale Warland Singers, and music director of the Minnetonka Choral Society. On several occasions, he conducted the Minnesota Orchestra in Young People’s concerts. From 1989 to 1994 he held the post of director of music and organist at Westminster Presbyterian Church in Minneapolis.

Peter was born in Cloquet, MN on June 15, 1954, and spent the bulk of his childhood in Clarkfield, MN. He was the youngest of five children of the Rev. Albert and Merle Hendrickson. From a very early age, Peter showed remarkable musical talent and began taking piano lessons. By the age of 14, he had built his own harpsichord and he was the organist in his father’s Lutheran church in Clarkfield. In addition to his musical abilities, Peter was a precocious student and an outstanding athlete, playing on several Varsity sports teams throughout his high school career, including football, baseball, and basketball. Additionally, he was an Eagle Scout and Valedictorian of the Clarkfield High School Class of 1972.

Peter received a BA from Augsburg University in 1976, followed by an MA from Macalester College, an MA in Musicology from Columbia University, and a Doctorate of Musical Arts in Conducting and Harpsichord from the Manhattan School of Music in 1991, where he studied with the distinguished harpsichordist, Kenneth Cooper. He pursued additional harpsichord studies in West Berlin at the Hochschule der Künste and the Berliner Kirchenmusikschule, where he took courses in conducting, organ, and harpsichord with such noted teachers as Martin Behrmann, Karl Hochreither, and Bradford Tracey.

Besides his musical accomplishments, Peter was a multi-talented and versatile person. During his twenties, he spent several years living at Holden Village, a spiritual retreat center in the Cascade Mountains in Washington state. While at Holden he was assigned to work in the kitchen, which led to a lifelong interest in cooking. He was completely fluent in German and remained a lifelong learner of languages, studying Finnish and Russian while in his sixties, having earlier studied Swedish, Italian, French, and Spanish. He was an accomplished skier, mountain climber, marathon runner, harpsichord builder, and carpenter, and for the last twenty years of his life he very much enjoyed spending time at his cabin in Aitkin, MN along the Mississippi River. Most importantly, he was devoted to his two children, Jacqueline and Rex.

In addition to his children, he is survived by his three sisters – Sharon Gronberg (Karl) of Austin, TX, Rachel Julian (Bruce) of Birmingham, AL, and Rosanne Swanson (Mark) of Chicago, IL – and sister-in-law, Susan Hendrickson of Bloomington, MN, as well as many nieces and nephews. He was preceded in death by his brother, David Hendrickson, and parents, Albert and Merle Hendrickson. Peter leaves behind many friends and colleagues. Special thanks to good friend, Karina Karlén, who was tremendously helpful to Peter in his final months. Memorials may be made to Augsburg University Music Department or to the National Association of Mental Illness (NAMI).

Sigrid was a loving nurturer, caring, and selfless. She deeply respected her fellow colleagues, who were wonderful supporters and collaborators and a great center of joy in her life. Unrelenting in pursuit of excellence, she dug deep to bring about the beauty in each musical piece her choirs presented. Because she was a stickler for meticulous intonation and attention to the text, her singers always kept their eyes fixed on her. She was known for taking liberties and never conducted a piece of music exactly the same way twice. She is remembered for having said, “God gave me two beautiful sons, and every year I’m blessed with 100 daughters” (referring to her particular fondness for the Manitou Singers). To her students, she bequeathed life skills that reach far beyond music: the power of preparation, pride in their work, deference and respect, and the importance of listening to each other. She inspired and imprinted these values on thousands of young singers. But above all else, she fervently believed that people – all people everywhere – mattered.

About the Author: Dennis Friesen-Carper

Dennis Friesen-Carper is a versatile conductor, composer, and keyboardist with performances in major venues of North America, China, and Europe. Former Music Director of the Pasadena Philharmonic Orchestra and Chorus, and Indiana Opera North, he is experienced with orchestras and choirs in professional, academic, and church settings. He is active as guest conductor and composer, most recently at Shanghai University, Wuhan Conservatory, and with the Polish Radio Symphony Orchestra of Warsaw. Dr. Friesen-Carper serves as Music Director at St John’s Lutheran Church in Lakeville, MN and is teaching conducting and leading the Philharmonia Orchestra for Spring 2022 at St Olaf College. In December of 2022 he will conduct the Asian Cultural Symphony in concert in New York’s Carnegie Hall. Commissioners include the Houston Symphony, Houston Chamber Singers, Tucson Symphony, Zhejiang Symphony and Symphony Chorus, Lake Superior Chamber Orchestra, Associated Mennonite Biblical Seminaries, Lutheran Music Program, and Augsburg Fortress, with recent sacred works premiered in Minnesota, Michigan, Indiana, and Ohio. Innocents, his oratorio with Walter Wangerin, Jr. on the abuse of power, received the 2010 Arlin G. Meyer Prize. As Reddel Professor of Music at Valparaiso University, Dr. Friesen-Carper created the all-student Symphony, conducted opera, musicals, and oratorio, taught composition, conducting, and improvisation. He has collaborated with Chinese musicians for over twenty years, including keyboards and arrangements for three tours with Silk Cedar, a Chinese/American fusion band.