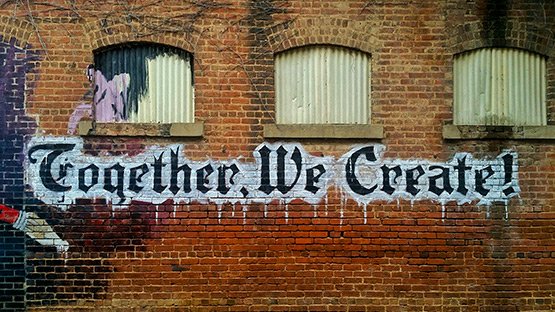 Stronger When We Work Together

Those are words that inject dread into the guts of every type-A student. As a high school and college student, there were few words that I hated more coming out of teachers’ and professors’ mouths. Now, as an adult my experience with collaboration is very different. It has led to some of my favorite musical performances in the last several years.

I have been consistently surprised at how much collaboration I have found in southeast Minnesota. Youth choirs including Bella Voce, the Honors Choirs of SEMN, and Northfield Youth Choirs are working creatively with other ensembles and musicians for their concerts. Choral Arts Ensemble, an adult, auditioned choir in Rochester, is hosting their third annual Singing For Life High School Festival for which they invite three regional high school choirs to come and perform with them in a side-by-side concert. Events like these abound, and they result in performances that are creative, engaging, and memorable for audiences and students alike.

And it’s not just community and semi-professional groups who are in on the action. One particular event that I have been impressed with since I began teaching is the Zumbro Education District Choral Festival. As a little background, the Zumbro Education District (ZED) is a consortium of smaller rural schools that may not normally be able to provide all the services needed to support their students independently. However, as a group they are able to cover the needs of member districts.

Every fall, ZED hosts a choral festival with member high schools, and it has become one of my favorite performances each year. The traditional setup of the festival is to have every school perform two pieces on their own, then to have all the choirs combine and sing three to four works together. This design allows our students to see and hear other choirs from the area while also providing an opportunity for them to sing music together that they may not have the vocal resources to sing at their schools.

This year was particularly fulfilling because we changed up the traditional design and tried something new. We upped our collaboration game! Instead of picking a few mass choir pieces and having choirs perform their own selections, we decided to try performing an entire masterwork: Vivaldi’s Gloria. It is unlikely that any of the member schools of ZED would be able to provide this opportunity to students on their own, but together we realized we could construct the program in a way that allowed our students to have this experience.

To make it work, we chose to do the first and last movements as a mass choir, and we divided the interior movements of the work between individual schools. Because the work was in the public domain, we were able to use the funding that typically went toward buying music to hire adult musicians to perform the solo and duet movements.

There were many positives that resulted from this format and made the experience special for our students. First, we ended up with different layers of collaboration. Some of our schools have smaller, younger choirs that do not necessarily have the experience or performing resources to sing a movement on their own, especially in the fall. For some movements, pairs of schools teamed up creating a kind of collaboration within collaboration, and they were able to perform with great success. Their students felt comfortable and supported because they had additional peers helping, and the audience saw and heard consistency in the size of the choirs, helping to prevent the judgement about size that sometimes comes with these types of festivals. In essence, collaboration allowed us to take competition out of the equation.

Second, Pine Island has an orchestra that has also traditionally participated in this festival by playing with one of the mass choir pieces. This has sometimes seemed to relegate it to second-class status, as students do not necessarily understand why the orchestra is a participant as well. However, for this performance the orchestra suddenly became vital to the entire production, which dramatically changed the relationship between the choirs and orchestra. Choral students understood inherently that the orchestra was an important part of this music, orchestra students were full participants in the entire concert, and both sets of students had the opportunity to experience playing and singing together. Collaboration allowed us to work better as a community of musicians.

Third, in addition to the adult soloists, we were able to hire a quartet of professional string players to play with our orchestra students. Between the soloists and quartet, our students were able to see how music can be a lifelong activity, and the side-by-side design encouraged students to take their performance to the next level. Collaboration allowed us to push the boundaries of what we thought we could do.

When I started teaching at Pine Island, I never would have guessed that my students would have the opportunity to sing the entire Vivaldi Gloria. Now, a few months after the festival, I still marvel at what a great experience it was. Because ZED member schools all worked together, the end result was highly satisfying for students, directors, and audience members alike. The whole production was stronger because of our teamwork, and our students felt like they had accomplished something they couldn’t have on their own.

Collaboration provides us with opportunities to rejuvenate our singers and choral programs. It gives us a creative structure to try things that are different, and to engage our singers and audiences in new ways. It allows us to accomplish what we may not be able to do on our own, and it builds our community by placing the focus on working together instead of competition. Every time I have been involved in a collaborative venture, it has been an incredibly energizing experience, and I can’t recommend it enough.

VOICES FROM THE DISTRICT