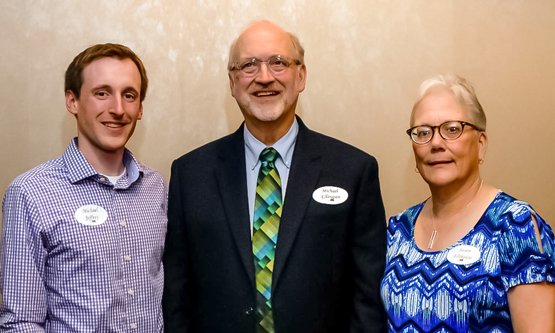 The ACE Award for the Southeast District, was presented to Michael and Susan Ellingsen of Blue Earth by ACDA-MN President-Elect Diane Heaney of Albert Lea High School. The award was presented on Thursday, August 9 at the Summer Dialogue Award and Recognition Banquet held at St. Olaf College in Northfield.

Mike and Sue Ellingsen have devoted their entire careers to nurturing and supporting musicians in Blue Earth and southern Minnesota. Mike was the high school and junior high choral teacher at Blue Earth Area Schools for over 30 years where he influenced and taught hundreds of young singers. His singers have gone on to be professional musicians and teachers and have continued his legacy of excellence. Sue was the elementary and junior high band director at Blue Earth Area Schools where she laid the foundation for a life in music by instilling music fundamentals in hundreds of young musicians.

In addition to their incredible work as music educators in the schools, Mike and Sue have been educators and ambassadors of music in their church, the local theater organization, and the community at large.

Mike has been the choral director at Trinity Lutheran Church in Blue Earth for many years where Sue also serves as handbell director; Mike is also a frequent accompanist for worship and provides music within Sunday services, funerals, and weddings with great regularity. Together, the Adult Choir and Handbell Choir have led worship services each Christmas and spring weaving together scripture and song. Mike and Sue not only created and led these services, but also often created new arrangements and orchestrations for the ensembles in addition to all of the other logistics. These services served as outreach for the congregation and allowed community members to come together in making high quality art.

Additionally, Mike has been a leading force in the Town and Country Players (Blue Earth’s community theater organization) for 42 years acting as the music director, pit orchestra director, actor, and singing coach for both the summer productions and the winter holiday show. Sue has played in the pit orchestra nearly every year and coordinates the programs, the gala for patrons, and assists with ticket sales each year. They also help to organize Blue Earth’s “Tunes at Noon” (formerly known as “Art in the Park”) where local musicians perform short concerts in a city park for community members.

Beyond the borders of Blue Earth, Sue and Mike have also made an incredible impact on the musical scene in Southern Minnesota. Sue spent several years serving on board for the Prairie Lakes Regional Arts Council, an organization that provides grant money to local artists and arts organizations. Mike was an organizer and the tenor section leader in a small choral ensemble NOVA CANTABILE which performed in southern and central MN for over 15 years. In addition, they regularly perform with the Fairmont City Band each summer.

In his retirement, Mike continues to judge solo and ensemble contests and large group choral contests. Mike and Sue are very active in MMEA as the retired members’ chair. Mike has also volunteered many times in various roles for ACDA of MN. He has been a terrific mentor to many young teachers, always concerned about their personal lives and journeys as choral directors. Sue has been a staunch supporter, cheerleader, logistical coordinator, and outstanding musician in her own right for every busy season and project. Their passionate and consistent work to further the role of music and choral singing in Blue Earth has helped the town grow into a community with a deep appreciation for the arts.

They are the parents of two wonderful children, an All-State horn player and alto, and a nationally sought after elementary music clinician and teacher.