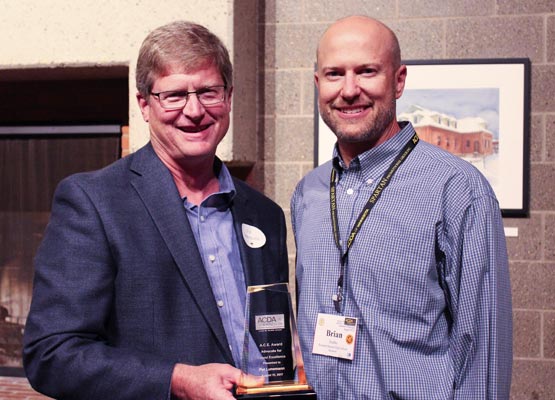 Community volunteers that…support our mission to inspire and support a community of choral musicians in our state.

I would like to introduce Pat Lunemann for the Central District ACE award.  He is the brain behind the Real Men Sing festival hosted by the Staples Area Men’s Chorus every Fall.

That festival has grown in size – now featuring 2 ensembles – one for high school, college, and adult choirs, and one for middle level boys, grades 5-8.  Many organizations now have festivals similar to this one – and it all came from the model built in Staples. I know Lee Nelson does one at Wartburg every year in Iowa – he got the idea after being a clinician in Staples.  The Great Northern Union also hosts a festival in the metro area based on the Staples model.  Here’s a clip from a newspaper article about him about a decade ago, when the festival was starting up:

The power of one person’s vision is an incredible thing. When coupled with the power of music to motivate and inspire the result can be astounding.

While Clarissa dairy farmer Pat Lunemann was growing up, he sang in his high school choir. It was a fine choir, and it performed quality music with style and commitment. It was a life-changing experience for Lunemann.

As the father of six children, five of them sons, he saw more and more small schools in Central Minnesota struggle to maintain quality choral programs in the face of increasing budget cuts. He saw more and more schools struggle to attract enough male singers to their programs to maintain a reasonably balanced mixed choir. To his dismay, he discovered that those young men who were singing in their high school choral programs were often so outnumbered by female singers that they were uncomfortable with the image of guys singing.

After high school, Lunemann continued singing in a men’s chorus in the neighboring community of Staples. As that organization’s President, he brought his concerns and his vision for addressing the problem to the Board of Directors of the Staples Area Men’s Chorus. The Chorus, which had sponsored the formation of the Central Minnesota Boy’s Choir a few years earlier, enthusiastically bought in to the vision. The result was a Choral Festival for young men entitled, “Real Men Sing!”

There have been about 200-350 singers at the festival each year and it has been going on for 12 years now.  Pat, that means thousands of singers have all been influenced by your vision.  You have helped programs across the Central district, throughout Minnesota, and even across state lines.  Thank you for being such a great Advocate for Choral Excellence.

Brian is the Vocal Music Director at Brainerd (MN) Senior High School. He is a past President of ACDA-MN. Brian is a transplant to Minnesota, having grown up in Sante Fe, NM and Denver, CO. He attended Concordia College in Moorhead, MN, singing in Paul J. Christiansen's last choir and Rene Clausen's first two choirs. Brian completed his MMEd at the University of Northern Colorado. His first job was a long term sub teaching grades 1-12 music/choir at Kenyon, MN for one year. Next was Grand Rapids, MN for sixteen wonderful years. In 2006, Brian moved to Brainerd HS, where he continue to teach 10-12 Men's Choir, Women's Choir, and auditioned mixed choir, and a chamber group that sings madrigals, carols, and vocal jazz.