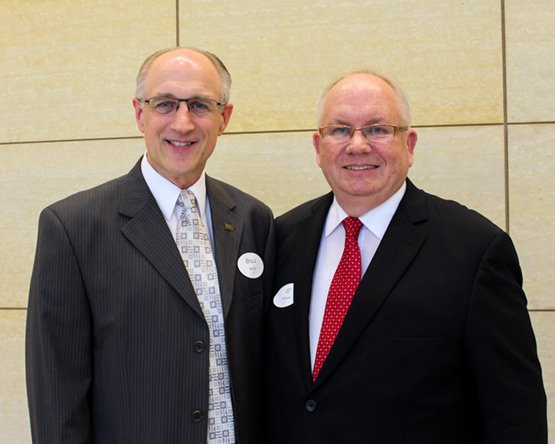 Bob “B.J.” Johnson (photo-right) was nominated for the ACE Award by Elizabeth Shepley. The award was presented to Bob by Bruce Becker (photo-left), who authored the following tribute.

Ever since his student singing days at Alexandria High School with legendary Minnesota choral director Murrae Freng, and his years performing with the Concordia College Choir under the direction of Paul J. Christiansen, choral music has defined and enriched Bob “B.J.” Johnson’s life and career. For nearly four decades, Bob amassed an impressive list of contributions to not only St. Olaf’s choral community, but also within the ACDA state and national organizations to enrich the lives of those who create and enjoy the choral art.

As manager of the St. Olaf College Music Organizations, Bob Johnson has been a model for how entrepreneurial management of college music ensembles can successfully serve both the aspirations of the music program and the larger interests of the college. I can imagine no one else who could have more appropriately partnered with faculty and student musicians to broaden the opportunities of bringing music from St. Olaf to the world. He has done so as a true servant spirit, committed without exception to the purpose of supporting the music ensembles. His tireless and creative endeavors on behalf of the St. Olaf music program have left an indelible mark that, no doubt, will continue to shape the direction this program will pursue for years to come.

Once described as a cross between the great New York impresario Sol Hurok and the renowned circus master P.T. Barnum, B.J. has performed dual roles as concert producer and event promoter over the years. Throughout his time at St. Olaf, he has encouraged the conductors of the St. Olaf Choir to think big, and his entrepreneurial sense has brought about many impressive and far-reaching innovations.

A leader in forging alliances with other colleagues and supporters of choral music, Johnson served on the steering committee that brought the 2002 World Symposium on Choral Music to Minneapolis. In 1990 he was instrumental in founding the College Music Tour Managers Association. In 1992, he was enlisted to provide his keen leadership to develop “The Concert of the Century,” bringing together for the first time the choirs of Augsburg, Concordia, Gustavus, Luther, and St. Olaf colleges to celebrate the 125th birth anniversary of F. Melius Christiansen. The proceeds of that 1996 event established the F. Melius Christiansen Endowment Fund.

Bob Johnson is a true servant-spirit who, during his long career, has worked behind the scenes — not only at St. Olaf but within the ACDA state and national organization — to be a strong advocate for the choral community. He has always striven in his life and work to see ways in which the choral art could enrich the lives of all who perform, as well as those who experience this beautiful gift of music.