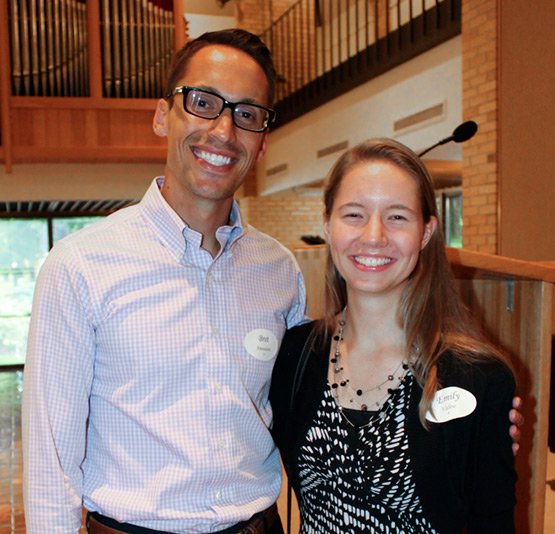 The following is a transcription of remarks made by Bret Amundson (photo-left) at the presentation of the ACE Award to Emily Valine (photo-right).

My name is Bret Amundson, and it is my pleasure to introduce the Northeastern Division Advocate of Choral Excellence Award winner, Ms. Emily Valine. Emily is the staff accompanist and music librarian at The College of St. Scholastica, and is the staff accompanist for both the Lake Superior Youth Chorus and the Twin Ports Choral Project. In her free time, she runs a studio of about 25 students, accompanies for local high school performances, and — although I’ve still never received a pair of socks — I know she likes to knit. [Edit December 2015: I have now received a pair of socks.]

I’ve known Emily for six years — we both started at The College of St. Scholastica in 2010. Emily was starting her first year as an undergraduate piano major, and I was in my first year as Assistant Professor and Director of Choral Activities. As I started my first year, my department chair let me know that I would have an accompanist who was just entering CSS as a first-year student. I thought, “Well, this should be good…”

My cynicism could not have been more misplaced. The first thing I learned about Emily is that the choirs needed way more of her time. She started coming to only the rehearsals near the concert, but I wanted her there every day. Emily’s musicianship was infectious; she was so extremely musical, such a great leader, and was so beautifully in tune with the needs of the choir and their bizarre conductor. She is one of those accompanists that make the choir sound better than you as a conductor ever could by yourself. Within our first year together, Emily became the CSS Choirs’ first-ever full-time student accompanist — a job that was written specifically for her.

Emily is a beautiful solo pianist, and equally embodies the qualities of a true collaborative musician: she is always prepared for rehearsal, she follows the lead of the conductor and anticipates changes with ultimate precision, she is flexible, and offers extremely helpful input — but only if prompted. Emily is also a wonderful bus partner. On our long tour rides, she sits in the front with me and we have the most engaging chats about higher education, religion, politics — all of those things you’re not supposed to bring up at the dinner table.

Emily has a wonderful sense of humor that is very subtle. For example, I will often steal Emily’s pencil during rehearsal or on tour I’ll ask for a piece of gum before we meet new people or Tylenol when things are getting out of control. So, at Christmas time last year, there was a present sitting outside of my office door that contained, of course: pencils, gum, and Tylenol.

I asked a few students what they think about Emily. One St. Scholastica music major mentioned how after a concert, Emily will always send the choir a nice note. For example, here is a note from December 2014:

Wow, choirs! Bravo on all your hard work this semester. Friday was great, but I was even more blown away at last night’s concert. Every moment was so wonderful that time stood still, and suddenly it was all over. I kept thinking, “I can’t believe I get to be part of this.” I am so blessed by you all.

Another St. Scholastica Choir student said: “[Emily] knows that one key to a successful choir is having a healthy conductor at its helm…” This student referenced a March 2013 E-mail Emily sent to the choir one day after a rehearsal where I was coughing pretty badly:

Whoever got Bret sick had better watch out, because I’m going to come play very loud, very dissonant music outside your room when you’re trying to sleep at night.

As I mentioned, Emily has become an integral part of the Duluth choral community. She shares her talent and time with high schools, middle schools, the Lake Superior Youth Chorus, and the Twin Ports Choral Project. A fellow Lake Superior Youth Chorus staff member stated about Emily: “Emily is always the well-prepared rock of the rehearsal and performance. Her reliable presence brings a very valuable peace of mind, and combined with her kind and humble spirit, she is a pleasure to have as a colleague.”

Bret Admunson is originally from Coon Rapids, MN. After graduating from St. John’s University, he taught three years at Cathedral High School in St. Cloud, MN and was the Associate Artistic Director of the St. John’s Boys’ Choir. Bret spent two years in Seattle at the University of Washington, and is currently serving as the Director of Choral Activities and Music Education at the College of St. Scholastica in Duluth.