When I began my choral teaching career, I had every intention of spending it at the high school level. However, by the time I retired, I had spent some of my career at the elementary and Junior High levels, and most of it teaching at the college level! I suppose that proves the saying that, “Life is what happens while we are busy making other plans!”

My Choral Directing story began in my junior year in High school (Vancouver High School in Vancouver, Washington) when I discovered that I really admired my choir director (Gene Nelson with BA from St. Olaf College) and wanted to pursue a choral directing/teaching degree. I had heard the St. Olaf Choir perform in Portland, Oregon at the Portland Auditorium and then the Concordia Moorhead Choir in the same hall the following year. After hearing and loving both choirs, I decided to apply at St. Olaf. I was admitted. I sang in the choir for two years and became Olaf Christianson’s personal attendant. Among other duties, I was choir librarian, turned pages for him as he read through new octavos, and I also did lawn work for him at his home. I studied voice with Ella Hjertaas Roe and between these two individuals, my musical life received its foundation. 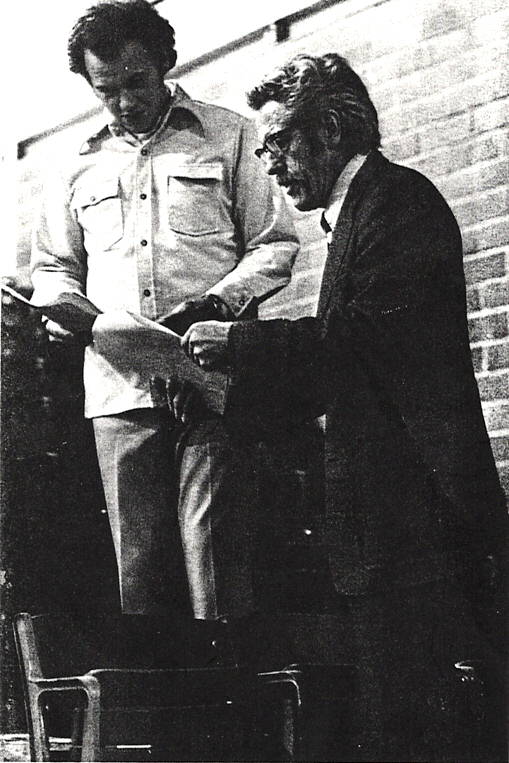 My first five years of teaching were at the Elementary/Junior High level – grades K-9. Although teaching these grades was not in my original plan, I loved every minute of it!

I firmly believe that these “training years” were key for me in becoming a successful teacher and choral director, regardless of the grade level.  I gained a firm understanding of the physical development of the voice from Kindergarten to Ninth Grade and I also became very interested in the physical evolution of the human voice and its ability to make sound.

After two years of teaching at the High School level, I was offered a position at North Idaho College in Coeur d’ Alene, Idaho. While there, I planned the tour for the choir and as part of it we sang at a chapel service at Concordia College, Moorhead and at St. Olaf College, both in Minnesota. A few moments before I was to walk out and direct, Paul Christianson (the Director of the Concordia Choir at the time) casually said to me that Concordia had an opening for the next year for a Chapel Choir Director and asked if I would be interested in applying. Timing is everything . . .  After much thought and prayer, I applied and got the job where I grew and thrived in a choral atmosphere that was and still is so very special.

The job at Concordia, Moorhead lasted five years, and then had to come to an end because it was not a tenure track position. In order to continue teaching at the college level it was apparent that I would need to earn a Doctorate. Two years and four summers later and a Thesis on Darius Milhaud’s Unaccompanied Choral Works and I became “Dr. Kenneth Hodgson.” The title felt heavy, but as my colleagues said, “You’ve earned it!”

For the first time in my short career, I felt ready for the next job. The Choral position at The University of Minnesota, Morris was open. I applied, interviewed and was offered the position. In the initial interview the Chancellor had stated that they wanted the new person to develop a choral program. I was a bit like a racehorse in the starting gates of the Kentucky Derby! I was able to use the experiences in my career thus far to follow through in the building of a new Choral program!

Within three years at Morris, I developed a 65-voice touring concert choir. We, that is all the students and myself, developed a constitution and bylaws to help keep clear expectations and an understanding regarding attendance at all rehearsals and performances. We worked to develop pride in what we were becoming. At that point I realized that we had developed a musical instrument and life experience that was influential in the emotional, and intellectual development of the students. Rehearsals became important – not just to prepare for a performance or tour, but a time for each student to step away from the rigors of college work and life, a time out from studies and conflicts. A time for all of us to find the refreshment of performing together – working together. Rehearsal time was a time to refuel in order to deal with life’s issues and challenges. 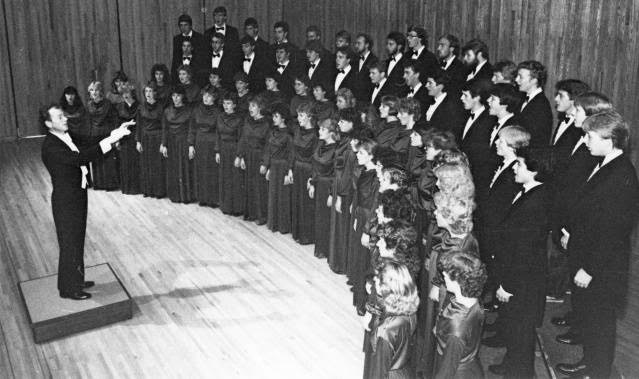 As one student put it about our choir rehearsals, “Every day at 5:00 PM we all gathered to reconnect in a holy sacrament that shined through in the beautiful music we made. We were each going through our own specific personal struggles, but overcame and connected through song. It was exactly what Ken talked about before each performance on the road, and during performances – ‘if the whole world could just come together and sing, we’d all be able to find one moment in every day that we could understand each other and see each other, and truly know each other as equal voices.’” (Bennett Smith)

The repertoire that filled the choir folders at UMM was selected to reflect a sampling of music history. I believe that we are in error if we do not expose our students to as much variety in literature and time periods as is possible through their school years.

One of the things that helped me to find new and interesting music for my students to perform was my membership and association with the American Choral Directors Association (ACDA). ACDA has been a miracle for choral music in the United States. My initial involvement with ACDA began with a phone call asking if I would take on the job of Editor for the Star Of The North Choral Journal. This resulted in a life-long membership with this wonderful organization! We, (Minnesota ACDA and I) won several National awards for the publication during this time. I later was nominated for President of ACDA and served a 6-year term with pleasure and a lot of blood, sweat and tears!

ACDA was a vibrant part of my choral career. The performances at Fall Conferences (and the winter MENC Conventions) are part of the lifeblood that keeps choirs alive. Collaboration and Camaraderie between Director and Choir, Choir and Audience, and Director and Directors is vital to Choral music. 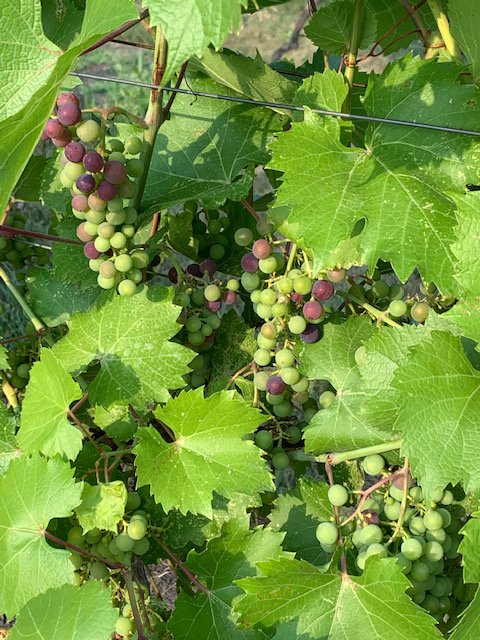 Since my retirement in 2013, I have put much of my time into planting and maintaining a small vineyard on the hobby farm where my wife Linda and I live. I think of the grape vines as my “choir.” I go out each day and see how each variety (section) and plant (singer) are doing. I prune a little here and there, direct a vine up on a better route, fine tune them a bit if the vines need it and nurture them through the whole season with the rich anticipation of the performances the fruit will produce – a fine wine to savor!

How can one summarize fifty years of Vocal and Choral teaching which covers Kindergarten through College? Add to that, years of church choir directing covering six different denominations, thousands of voice lessons and numerous professional singing performances – I feel tired just thinking about it, so I retired!

Shalom and Cheers to you all,
Ken

Dr. Ken Hodgson is Professor emeritus and former Director of Choral Activities at the University of Minnesota Morris. He was awarded the F. Melius Christiansen Lifetime Achievement Award by the American Choral Directors Association of Minnesota in 2018.