Mr. Steven J. Hoemberg, Jr. earned his B.A. in Music with concentrations in K-12 Choral Education and Vocal Performance from St. John’s University (MN) in 2001, where he studied choral conducting and vocal pedagogy with Dr. Axel Theimer. Since 2001, Hoemberg has served as the Director of Choral Activities 7-12 at Staples Motley Public Schools, where he was also a 1997 graduate and a student of Mr. Stan Carlson. In 2010, Hoemberg was selected to follow Stan Carlson as only the second Director of the Staples Area Men’s Chorus since 1971. He also has worked as Director of the Staples Area Women’s Chorus (2007-10) and Director/Founder of the Colla Voce Girl’s Choir (2007-10). As a member of the Minnesota Music Educator’s Association (MMEA) Hoemberg served on the board of directors as the Mid-Level Chair (2005-07), an All-State Section Leader (2006-08 and 2012), and as Region Representative (2010-12). He is also a member of the American Choral Directors Association (ACDA) of Minnesota, for which he briefly served as the Repertoire and Standards Chair for Male Chorus. Hoemberg is quite passionate about adolescent changing male voices, strategies for teaching young male singers, methods for making sight-singing simple and relevant and strategies for picking appropriate repertoire for young men’s voices. He is a frequent presenter throughout the region, including twice at the MMEA Mid-Winter Clinic, the Minnesota ACDA Summer Dialogue, and most recently at the North Dakota ACDA State Conference. Hoemberg’s article titled “Managing the Adolescent Classroom” was published in the MMEA “Interval,” as well as the Vermont Music Educator’s Association periodical. Hoemberg’s choirs were featured at the 2006 MMEA Mid-Winter Clinic (7 & 8 Boy’s Choir) and again at the 2008 MMEA Mid-Winter Clinic (A Cappella Choir). In 2012 Hoemberg prepared the SMHS A Cappella Choir, the Staples Area Men’s Chorus, and the Staples Area Women’s Chorus for a performance of Morten Lauridsen’s Lux Aeterna, directed by Dr. Matthew Culloton, in collaboration with The Singers – Minnesota Choral Artists. Hoemberg is currently working toward a Master’s Degree in Music Education through North Dakota State University (NDSU). It is a core belief for Hoemberg that every human deserves the opportunity to experience singing, regardless of age or ability. 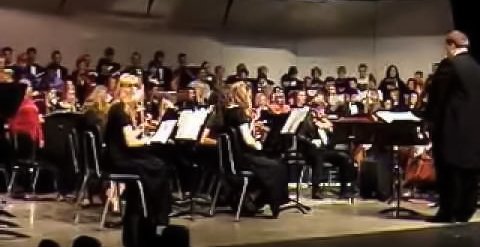 Embracing and Building Upon a Legacy
Above the chalk board in the choir room is a sign that reads: “WE are FAMILY.” This is — and has been — a hallmark of the choral program at Staples Motley High School (Staples, MN); a program that has gone from strength to strength for over fifty years now. Starting in 1965, Stan Carlson crafted a powerhouse …. Read More